Enter your Email below and receive a daily summary of new posts.

Steam locomotive 2767 on the road in South Africa

The NBL Group has told RailAdvent that their RSH 19D 4-8-2 steam locomotive No. 2767 has been on the road moving from Creighton to Pretoria in South Africa.

The group has entered a load agreement with the Mpumalanga Rail Company who will be restoring the locomotive and will be using it for 10 years after the locomotive enters service.

The locomotive is being taken to Wonder Steam Trains for the work to be carried out and will then move to Middelburg where the Mpumalanga Rail Company.

After three years of storage at Creighton, this move is seen as a new lease of life for the locomotive.

The locomotive was built by Robert Stephenson & Hawthorns, who also had locomotive works in Darlington and Newcastle. Labels: All US Rail

When the 10-year-old THSR meets the century-old Taiwan Sugar Railway. 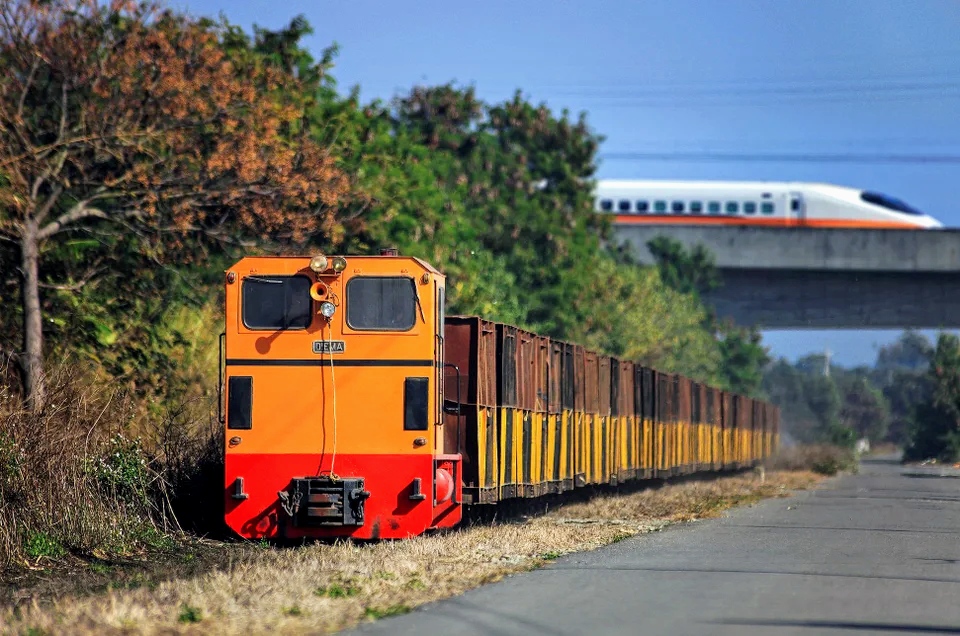 CC 20002 was a 25-kV prototype among many others built by Alsthom. Seen here chilling in Annemasse, France (by A. Renault) 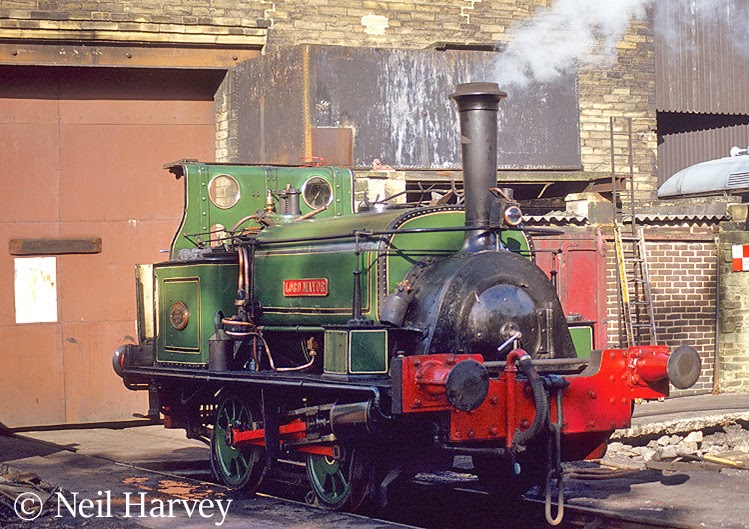 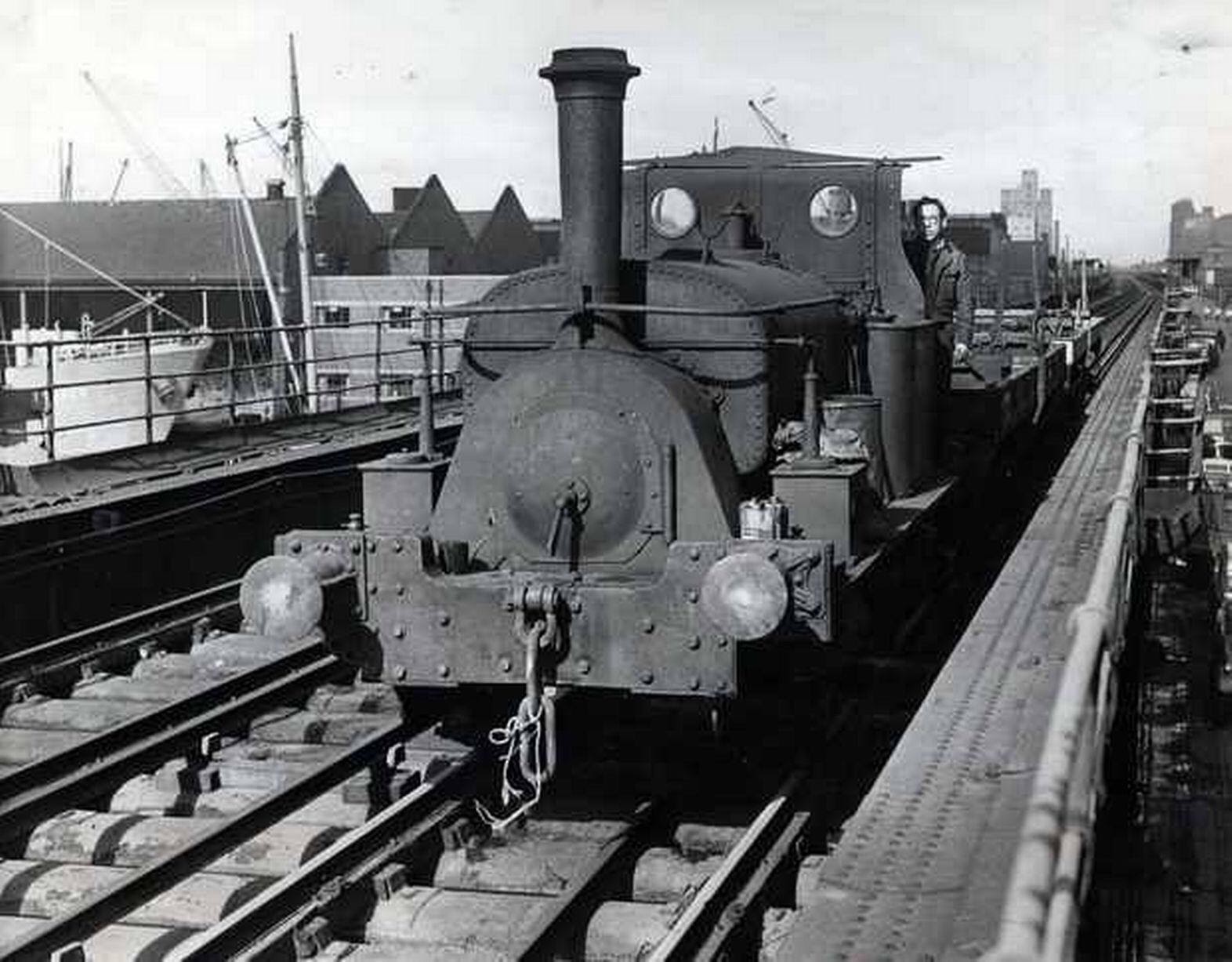 This locomotive was built in 1893 by Hudswell Clarke for Edmund Nuttall to work at Salford at the Ship Canal Dock. As a locomotive designed to work for a contractor it was designed to weigh only 15½ tons. The small size of such locomotives was determined by the need for easy haulage by road, on a low loader towed by a steam traction engine. As most of these locomotives were narrow gauge Lord Mayor is somewhat unusual in being standard gauge. Here is a color photo 402 Lord Mayor at Haworth on the KWVR – October 1985
Posted by John Currin at Friday, November 27, 2020 No comments:

Baldwin-Westinghouse #4000, aka The Blue Goose, an experimental 4000hp gas turbine electric locomotive. Built in 1950, it demonstrated on many railroads, including Chicago & North Western as shown here, but found no buyer and was scrapped in 1953. 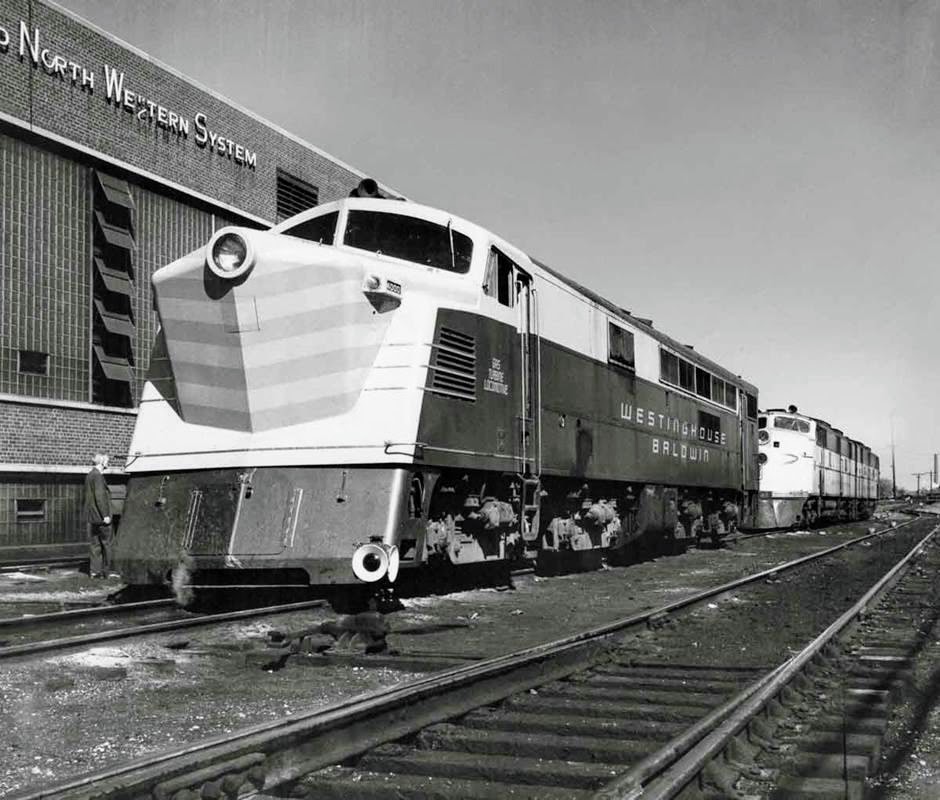 Labels: All US Rail, Locomotives

A CN local has finished picking up a few covered hoppers at Spencer, and now waits for a northbound stack train to roll by. CN 2852 brings up the rear of the stack train. 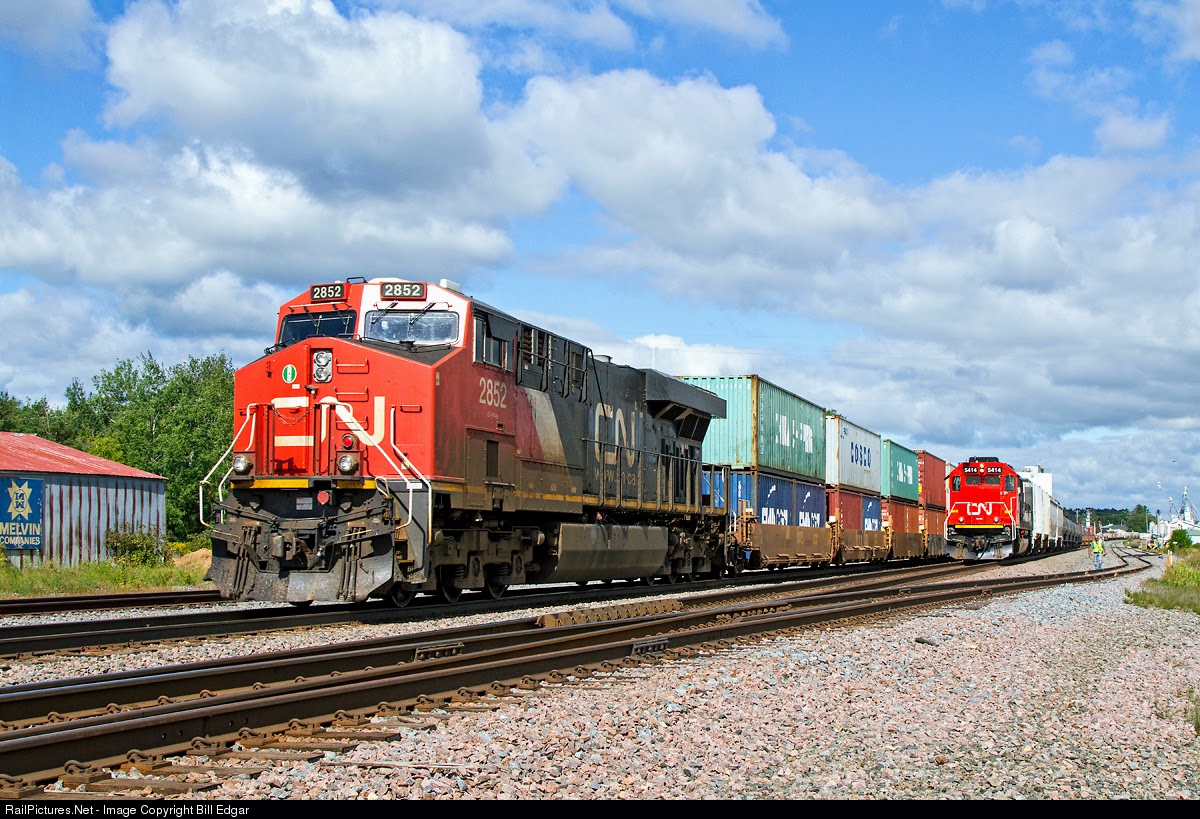 Royal Scot 46100 with the 'Torbay Express' heads west out of Dawlish while a FGW Penzance-London Paddington HST holds the up line. 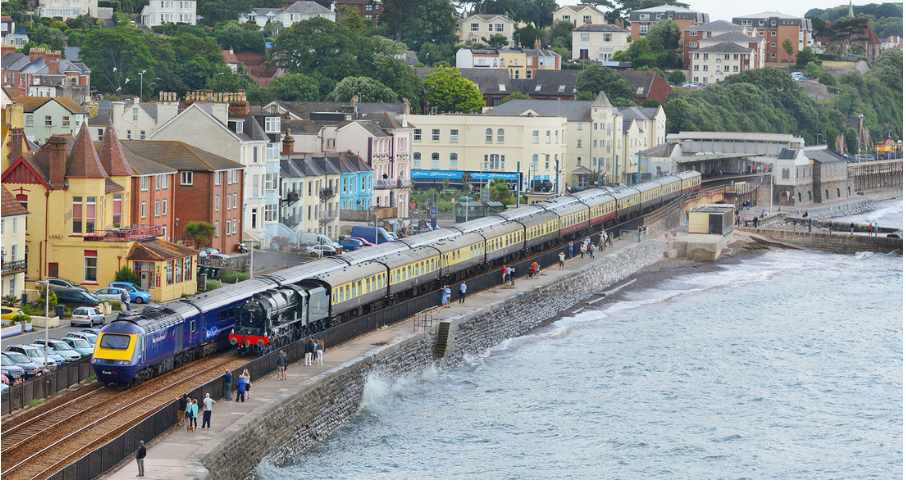 Despite clear skies when the train left Canton, a dreary fall rain blanketed the valley of Asheville, North Carolina as the Blue Ridge Southern's T31 makes the final approach to the NS yard to interchange cars. The train is crossing the French Broad River on a former Southern Railway concrete bridge. 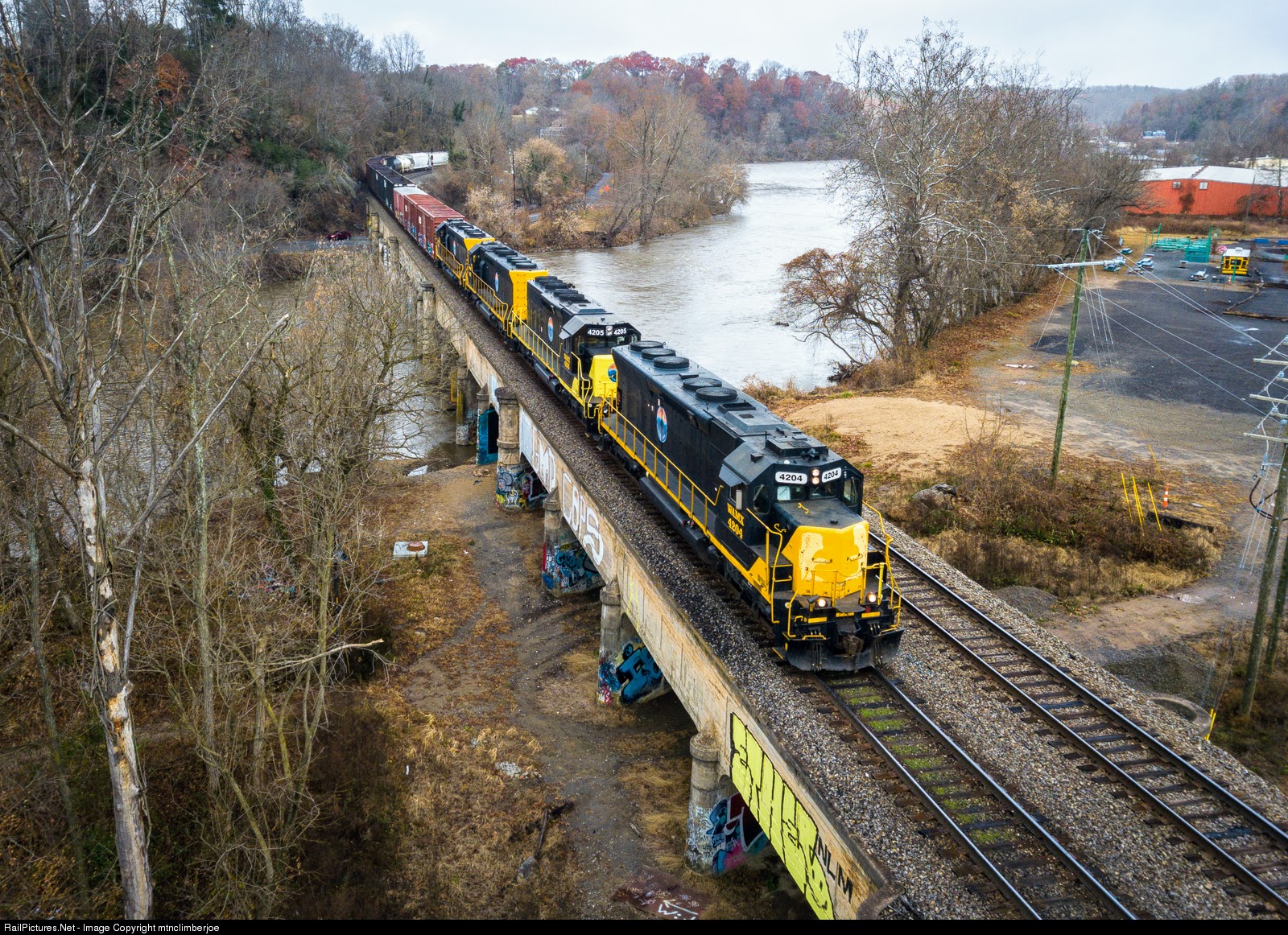 Labels: All US Rail

Train PBRVY rounds the big curve at Caliente on October 31, 1976. The SP began experimenting with radio controlled helpers during the summer of 1974. The railroad received a small group of Tunnel Motors equipped with the special transmitters and receivers. Units in the 8300 series were equipped to be masters and units in the 8350 series were set up as slaves. Initial tests on the steep grades of Tehachapi were not very successful due to tunnels and mountains that blocked radio transmissions. In early 1976 SP borrowed BN SD40-2s 6800 thru 6807 (masters) and RCUs 105 thru 112 (F7 B units with receivers to control slave units). By 1977 the BN units had been returned and the SP units shifted to the Sunset Route which had no tunnels but enough ups and downs to make radio helpers quite useful. Disk 41